New River Gorge National Park and Preserve. Photo: US Department of the Interior

It’s just a one-word change — but those who fought for the new designation say it could make all the difference for the local tourism economy.

Two other national parks — one of the youngest, and one of the oldest — have lessons for the future of the New River Gorge.

A New Kind of Visitor

Three years ago, the Indiana Dunes Lakeshore was in the exact same position as West Virginia’s New River Gorge. Congress had just approved a national park designation for its fifteen miles of ecologically diverse beaches along Lake Michigan.

The new name brought a lot of popularity that surprised the park staff.

“It was really amazing how much the name change meant to so many people out there, said Bruce Rowe, chief interpretive ranger. 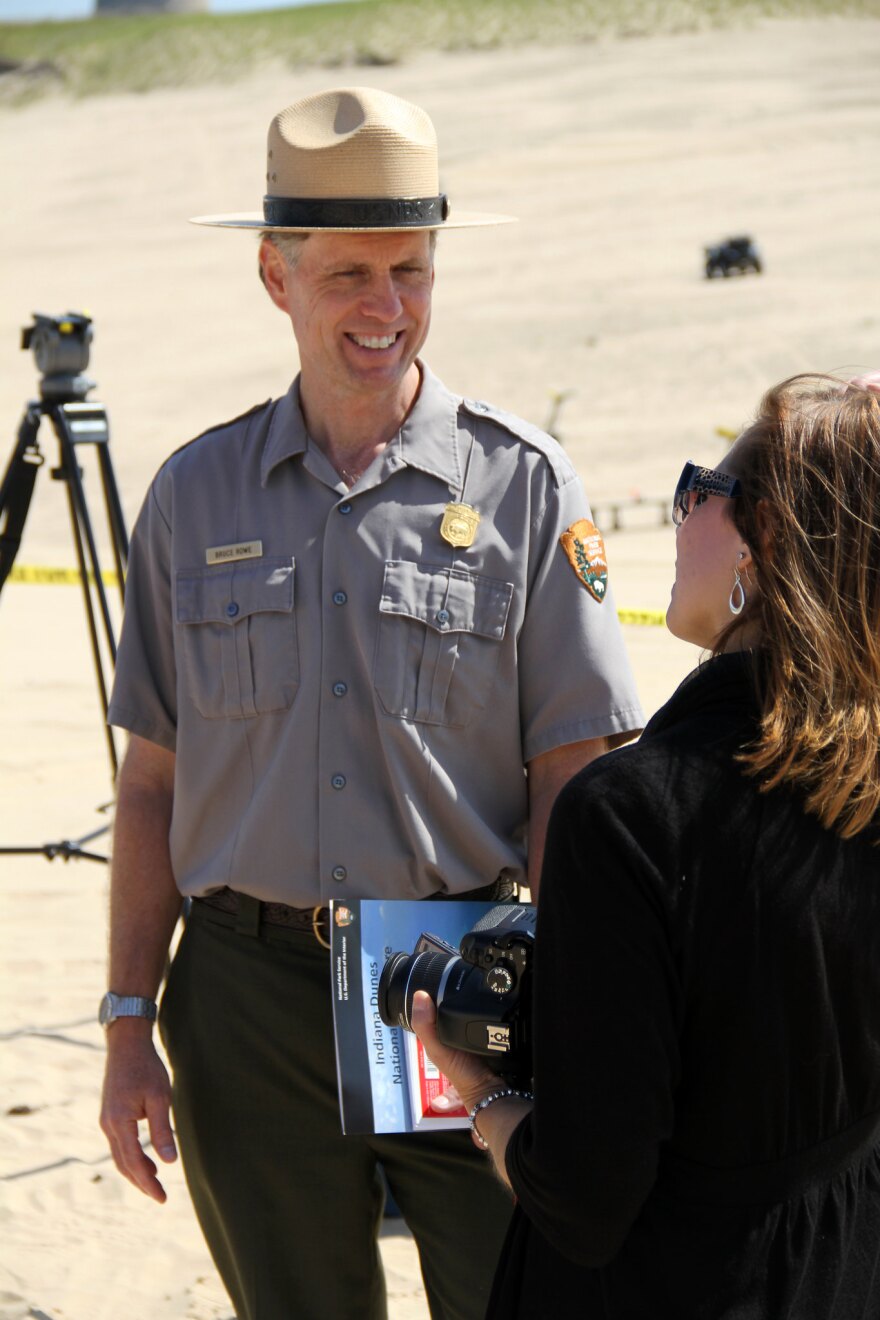 In the first summer as a national park, visitation increased by 28 percent.

Pat Majka, a longtime park volunteer, said it wasn’t just more visitors, there was also a new type of visitor. In addition to locals or daytrippers from nearby Chicago, she saw more first-time visitors from farther away.

“I’ve met people that will just travel the whole country stopping at every park,” Majka said.

At the visitors center, almost twice as many people walked through the doors that summer, and the COVID-19 pandemic only added to the park’s popularity.

“I think it’s always nice to be part of someone’s vacation, but now we’re part of people’s bucket lists.”

Its beaches stayed open while those nearby shut down. At one point it was so busy, the police were brought in for crowd control.

The national park impact is felt on the beaches, as well as nearby towns like Chesterton. Businesses there have seen more visitors in a place that used to be just a highway stop for travelers.

She’s lived in the area for 30 years and said there are some inconveniences to suddenly having a national park in your backyard.

“We got our RV, and I tried to book a camping spot,” she said. “We couldn’t get a spot for three months. There was nothing.”

But overall, she said the positives of the name change far outweigh the negatives.

While Indiana Dunes is still a young national park, the Great Smoky Mountains National Park has been a vacation destination for over 80 years.

Dedicated in 1940, it’s been the most visited national park every year since the end of World War II. A third of the nation’s population is within a day’s drive, and several nearby towns form a tourist mecca — home to Dollywood and many other attractions.

You don’t really see layoffs anymore. It’s almost a thing of the past, which is amazing.

She got her first job in grade school as an usherette at Hee Haw Village — a roadside tourist attraction with a comedy show. Since then, she’s worked almost every kind of tourism job you can think of — retail, a wedding chapel, and now vacation rentals.

She remembers when the tourism economy wasn’t enough to sustain her family year-round.

“When I was growing up and my mom worked in hospitality, you know, she was laid off for three to four months during the winter, and then brought back to work,” King said. “You don’t really see layoffs anymore. It’s almost a thing of the past, which is amazing.”

Park visitors pump over a billion dollars into the area’s economy each year.

Leon Downey, tourism director in Pigeon Forge, said these tourism dollars are such a big deal that even his eye doctor has a stake in it.

“First question he asked me is not, ‘How are your eyes? Are you having any problems with your eyes?’ He said, ‘Leon, what kind of a tourism season are we going to have this year?’” said Downey. A successful season means more money for locals to spend on glasses in a town that is holistically dependent on the tourism economy.

Right now, Downey said the relationship between the town and the national park is strong, but it took time to get there. Over the last 20 years, the park and nearby towns have worked together to promote the whole region and ensure economic success.

“Our guests don’t see us individually as Pigeon Forge, or Gatlinburg, or Seville,” Downey said. “When we asked them where they went on vacation, they went to the Smoky Mountains.”

What This Could Mean for New River Gorge

Now, what does all this mean for West Virginia’s new national park and preserve?

The New River Gorge is likely to see more visitors, this summer and beyond. Many of them will be first-timers and curious about the new park. The crowds will more than likely mean extra wear and tear on the roads and trails.

But if park infrastructure meets the demand and money is invested to promote the park, economists and tourism experts say new visitors will become repeat visitors and spark a robust tourism economy like the Smokies.

“If you have that national park designation, that’s already inherently a stamp of approval that says, ‘There’s a really cool spot here that you can come and visit and there’s going to be cool stuff going on,’” said John Deskins, an economics professor at West Virginia University who studies regional economic opportunities. “I think this is a core element of forming the kind of recreation economy that we should strive to build in that part of the state.”