Terry Shields, 62, grows corn, soybeans, and wheat on 1,200 acres in Jefferson County, northeast of Pittsburgh. He represents the fourth generation in his family to farm. Credit: An-Li Herring / 90.5 WESA

Pennsylvania farmers are aging, creating an uncertain future for their communities and industry

This story comes from our partner, 90.5 WESA. It was originally published on November 17, 2021 and is the first in a series about the challenge of cultivating a new generation of farmers in Pennsylvania.

A typical workday for Terry Shields starts at 6 a.m. and ends well past dark. A grain farmer in Jefferson County, Shields’ job is all-consuming.

In the fall, he typically spends more than 10 hours at a stretch steering a combine harvester with his yellow lab mix Maya nestled at his feet. The towering machine mows over crops, separating the grain from the chaff.

Last spring, Shields stayed out past 11 p.m. one night, planting a field of corn located feet from his home in Clover Township. 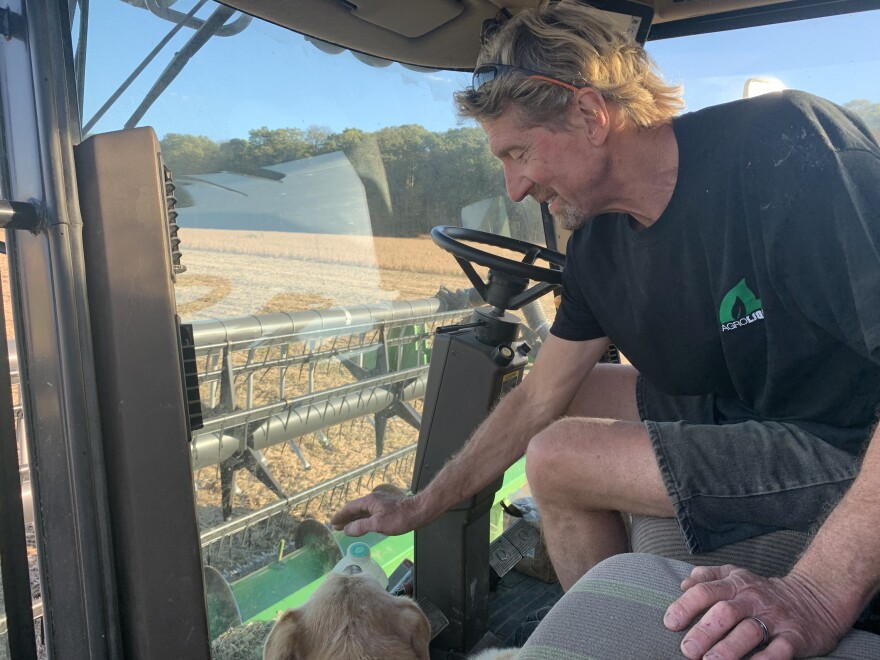 “There’s times in farming, I call it, it’s ‘go-time.’ You just got to go,” Shields said as he sat outside his house on a cloudless mid-October day. “You might work till one, two in the morning and sleep for three or four hours and be back up before the sun comes up.”

Shields raises corn, soybeans, and wheat on his 1,200-acre farm located about an hour-and-a-half drive northeast of Pittsburgh.

The 62-year-old farmer said he needs to pull long hours to turn a profit. But he also loves the work.

“I joke with my friends that if I could find a patch for farming, I’d be the first to sign up because I am addicted to it. I do and really enjoy it,” he said.

But given his age, he quickly added, “I am seriously realizing that I probably do have to pull back on the reins a little bit and slow down.”

Shields said, as he gets older, he wants to spend more time with his wife, volunteer more, and just relax.

Still, he said it’ll “hurt” to walk away.

“I’ve been working in farming and driving tractors for at least 55 years,” he said. “So yeah, to make that monumental shift in lifestyle and to know that there is no reset or reboot button you can push … once you make the call, you better be prepared to walk away from it because you’re not going back.”

But Shields said the farm hasn’t been the same since his older brother retired last year. He and Shields were the fourth generation to run the family business.

Shields doesn’t know when he’ll sell, and he doesn’t know who will buy the farm. If it were up to him, a younger farmer would take over, but Shields doubts there’s one who could afford that investment.

“It does seem inevitable that the farm will stop with my brother and I,” he said, his voice fading slightly.

Retirement is often a wrenching topic for farmers, said Darlene Livingston, executive director of Pennsylvania Farm Link and a farmer herself.

It naturally raises thoughts of one’s mortality, she said, and can represent an early form of death for some.

Farming has “been their lifeblood. It has been their whole life,” Livingston said. “So, it’s really a huge passion, and it’s very hard to give that up.”

Livingston said it can take years to transfer a farm from one generation to the next, with the original owner mentoring the new operator and gradually handing over control.

“It is a slow progressive transition,” she said. “General recommendations are to be transferring assets in your 40s and 50s [and] to begin with equipment and things like that. And then the last thing would be the transfer of the farm.”

But even with years of planning, there’s no guarantee.

Don Kretschmann ran an organic farm in New Sewickley Township for more than 45 years before retiring in January. He began to plan for the transition in 2011 and had employees who wanted to take over the business. But they eventually left due to personal circumstances or to take other jobs, Kretschmann said.

Despite running ads in agricultural publications across the country and receiving some inquiries, Kretschmann still hasn’t found a new tenant. The Pittsburgh Post-Gazette chronicled Kretschmann’s struggle in January.

Since then, Kretschmann agreed to lease a small portion of the farm, but that arrangement fizzled because, Kretschman said, the renters didn’t have the skill to farm at scale.

“It’s an undervalued occupation, let’s put it that way, very much undervalued,” he said. “It’s sad because farming is so critical. I mean, it’s really the food of the human race. … We can’t just go out there and forage on trees. We need farmers.”

Agricultural workers are expected only to become more scarce in the coming years.

A 2018 study predicted there will be 75,000 unfilled ag jobs in the state by 2027. That deficit represents about a quarter of today’s workforce. Researchers say there won’t be enough skilled and migrant workers to fill the gap as current farmers age out.

In 2017, more than half of people who run Pennsylvania’s farms were aged 55 or older. With their impending departure from the profession, Pennsylvania’s agricultural communities face an uncertain future.

“The intergenerational transfer of farms is a really important discussion,” Pennsylvania Secretary of Agriculture Russell Redding said. “We’ve got to be there to support new, beginning farmers in that transition and not simply assume that they have all of the support structures around them to be successful.”

Redding said his industry recognizes the need for workforce development, and he’s betting that recent investments in apprenticeships, urban farms, and school-based programs will help young people to see a future for themselves in agriculture.

Such initiatives are crucial for the Pennsylvania economy, Redding said, because agriculture generates nearly one-fifth of the gross state product. A 2018 study notes that the ag economy consists of more than growing crops and raising livestock. In addition to farm equipment manufacturing, logging, and landscaping, it also covers the sprawling food processing industry.

Nationwide there is a shortage of small butchering facilities, but COVID-19 underscored the problem, as outbreaks of the disease forced some of the nation’s biggest meat processors to temporarily close facilities.

But just outside Latrobe, John Jamison hasn’t been able to sell a meat processing plant that he and his wife, Sukey, put up for sale about a year ago.

“For years, we’ve heard about the shortage of small plants in this country and [that] you can’t get animals butchered,” Jamison said. “And so we thought there would be interest in it, but there is not.”

The Jamisons also raise sheep and lambs. They bought their plant about 30 years ago.

“I think a lot of people are afraid of that. They don’t think that the reward is more than the risk, and it is,” Jamison said.

The Jamisons said if they can’t sell the plant this year, they’ll let the business die.

That would hurt farmers who depend on the facility to prepare their meat for market. In some places, that ripple effect can cause entire agricultural communities to shrink. But in other places, those communities transition into something entirely different.

Like Kretschmann, Republican state Sen. Elder Vogel is one of a few remaining holdouts in New Sewickley Township, located on the eastern edge of Beaver County.

He’s always been a farmer, and cornfields run from right behind his home down to the Pennsylvania Turnpike.

While farms filled the landscape of Vogel’s childhood, he noted the area is “now all full of houses.”

“My dad and everybody, they were all getting up in ages, and some of them sold the farms and retired. And other ones passed away, and their kids sold the farms,” he said.

When Interstate 79 opened in the 1970s, a building boom took off in Cranberry Township, just a few minutes from Vogel’s 370-acre farm. Land values soon shot up, and new farmers couldn’t afford to buy the property themselves.

“Land is a finite resource we have, and every acre you cover with houses is another acre you’re not going to grow crops on,” he said.

Pennsylvania lost six percent of its farmland between 2012 and 2017, according to federal estimates. While Vogel supports economic growth, he said it shouldn’t come at agriculture’s expense: Without a balanced approach, communities like the one he grew up in disappear.

“Back then, you had neighbors [who] lived on both sides of the road only half a mile away. You’d go ask your neighbor to borrow a hay rake or borrow a wagon or something or whatever, and there’s nobody left to do that with anymore,” he said.

But he’s attempted to attract more people to agricultural work.

For example, in 2019, he proposed a tax credit for farmers who transfer land or other assets to beginning farmers. The bill won unanimous approval. But since it passed, only about two dozen beginners have been certified to participate in the program, showing that even more work may be needed.