This story was first published on October 16, 2020

This story comes from our partners at West Virginia Public Broadcasting. It was produced for Inside Appalachia, a weekly radio program and podcast.

Standing at the base of “The Hole,” a gargantuan rock formation in West Virginia’s New River Gorge, you can hear water coming down the mountainside, rushing to the river below. Looking up, you’d see the rock shooting hundreds of feet overhead, curving as it goes, to form an imposing-looking overhang.

On a recent fall day, you also would have seen a man powering his way up the craggy face. He moved fast — finding handholds here and footholds there. The only things that protected him from falling on the jagged boulders below were some rope, some carabiners clipped into metal anchors that have been drilled into the rock, and his partner, who stood on solid ground, holding one end of his rope.

The climber worked his way higher and higher. Then, all of a sudden, he came swooping down toward the ground.

Grant lives in Pittsburgh, but drives down to the New River Gorge nearly every weekend during the warmer months, to climb rocks like The Hole. He got into the sport five years ago.

“It was actually because I was fighting depression and I went to the gym and I loved it. Even now if I’m having a bad day or a bad week, I go climbing and it helps me a lot,” he said. “It’s a puzzle. You have to challenge yourself into solving a puzzle not based on your strength but on your technique and your own ingenuity. So it’s physically active but it’s also mentally stimulating.”

“Like for me, I don’t like failure. I’m also afraid of heights. So it’s me fighting the fear, me fighting the fact that I’m going to fail. It’s everything I hate, climbing embodies. And I love that,” he said.

Blood Raid was established and named back in the 1980s by the climber Doug Reed. That’s how it works in the climbing world. Develop a route, and it’s yours to name. But this tradition has come under scrutiny of late.

“If you climb a route for the very first time you traditionally get to name it. It’s just a tradition, not a right. That’s what we’re arguing about right now,” Grant said. “Is that just because you climbed it first, you decide to be juvenile and name it something racist, you don’t get to say you’re not racist or something like that. Just change it.”

The argument Grant referenced started in May. He came down to the Gorge with some climbing buddies on Memorial Day weekend, to celebrate his birthday.

“We are climbing at this wall. There was a route called “Tigger.” It had “Another Tigger in the Morgue” and “Hard Pipe-Hitting Tiggers,” which are both plays on the N-word. And I was really offended by it,” said Grant, who is Black. “It was the first time I realized something like a name could ruin my entire time. I didn’t want to go anywhere close to that wall, I didn’t want to touch it, I didn’t want to look at it. It was so offensive and so hurtful. It ruined by day. It almost ruined my entire trip.”

These offensive names live in a two-volume guidebook called “New River Rock,” which has directions to and descriptions of 3,000 climbing routes in the gorge. Nearly 100 have similarly offensive names.

There are climbing routes with names like “Tar Baby” and “Slave Fingers.” There’s a whole series of climbs named for the racist character Sambo, like “Sambo Goes to Disneyland.” And the list goes on and on.

“So here’s a cool one. Kool Krux Klimbing with all Ks? Yeah,” Grant said.

Grant said these names have upset him for years. But until recently, he felt powerless to do anything about it. Then two important things changed. For one, his 10-year-old son started climbing with him.

“The defining moment is, when can I allow my son to open a guidebook and read it and not be worried about him asking me questions? ‘What’s a tar baby? What’s slave fingers? What’s Kool Krux Klimbing? Hey daddy, is that KKK?’ I don’t want to have those conversations. I want to be able to have my kid enjoy the outdoors,” he said.

The other thing that changed for Grant was the nationwide protests that followed the death of George Floyd, a Minnesota man who died after a police officer used his knee to pin Floyd’s neck to the ground for several minutes.

Eventually, conversations about police brutality shifted to include the wider problem of racism in America. The world of rock climbing began its own conversations — because no matter where you go, from the Red River Gorge of Kentucky to the Ten Sleep Canyon in Wyoming, racist route names are a problem.

Reckoning with the Racist Past of Bird Names

Reckoning with Racism in Climbing Culture

Grant and his partner Natalie reached out to the New River Alliance of Climbers, better known as NRAC, an advocacy group that represents climbers’ interests in the Gorge. They asked the group to acknowledge the racism in the climbing culture.

At first, they got no response. But after a few weeks, NRAC’s board reached out and set up a Zoom call in late July with Grant and other climbers of color. They wanted to discuss how to make rock climbing in the Gorge more diverse. The issue of the names came up pretty quickly during the call.

“It could start with the route names,” climber Ronnie Black, a Black climber in Vermont who has climbed in the New River Gorge for years, told the Zoom assembly. “Just coming from out of town, to a climbing area, looking at that guidebook, it’s damn near impossible to climb a route called ‘The Racist’ and go and camp in the woods and not feel like you’re going to get lynched when you go to sleep.”

Grant was also on the call, and stressed that NRAC should facilitate getting the names changed.

“You guys know each other and I don’t think we as a marginalized community should have to reach out to the first ascensionist and say ‘Hey we don’t like this, can you please change it?’” he said. “We think NRAC should be the liaison between us and the community and say, ‘We think you should change this.’”

This idea — to have the people who christened these routes to change the names — is more complicated than it sounds, because some of these routes have been around for over 30 years and their creators are scattered all over the country. 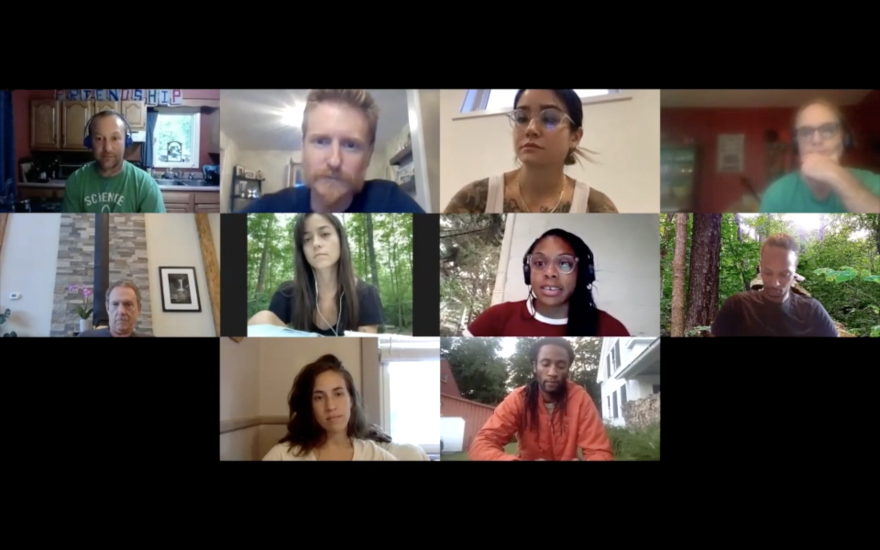 A screenshot from the July 28, 2020 Zoom call that NRAC held with minority climbers to talk about racism in the climbing community.

And what if the first ascensionists don’t want to change the name? In that case, NRAC might just re-name it for them.

“When I look at climbing and how much it’s changed, when I started climbing, for years there weren’t even women climbing. Today’s it’s so different,” Kistler said. “I don’t think anybody here would have an issue. There have been some issues with the name changes and preserving history and people are struggling.”

“But I think all that’s process. And the fact of the matter is, changing the names is a really simple lift compared to what’s next,” Kistler said.

NRAC quickly formed a Justice, Equity, Diversity & Inclusion Committee — JEDI for short — and started trying to figure out how many names needed to be changed.

Members of the committee went through the guidebook page by page and ended up with a list of 92 route names that ridicule some type of minority group: Black people, Asian people, LGBT folks, people living with disabilities. There are all kinds that are offensive to women. A lot of the names can’t be said on the radio.

There’s a deadline to get this work done, too. A new edition of the guidebook’s second volume will go to press this fall. After that, it will likely be a long time before another edition is printed. So, if NRAC doesn’t get the names in that volume changed quickly, they will sit on bookshelves for years to come.

Mikey Williams compiled the first comprehensive New River Gorge climbing guidebook back in 2008. He is preparing the new edition too. He also used to be a member of the NRAC board until he resigned a few months ago, partially because he says the organization shouldn’t be wading into what he sees as social justice issues.

“As the guidebook author, it made sense to recuse myself. Then I look at this list and I’m like, man, it’s frustrating,” he said. “Any of the names that had a reference to the N word, for sure. You’re like, OK. That was bad. And the Kool Krux Klimbing, all spelled with K’s? Like, come on man. How could we not have seen this? Let’s get the KKK stuff out of the book.”

But there are other names on the list that Williams did not see as offensive, including some of the routes he personally named.

“Here’s the route description for the route ‘Aryan Race.’ ‘A sustained pump race of reflective white rock that’s steeper than a Hitler salute,’” he said. “Probably not in the best taste, but to me I had no idea it would be … offensive isn’t the word for it. I never thought that would be taken as a celebration of white supremacy. I’m certainly not a white supremacist. I’ve got no love for Hitler. Being able to use that description, it’s such a colorful, accurate description of the route.”

Williams said the route name “Aryan Race” pokes fun at the Third Reich, but when the name is taken out of context, it becomes offensive. He’s not the only one that feels this way. Several climbers have pushed back on NRAC’s renaming efforts because, they said, the original climbers weren’t trying to be racist or offensive. But Grant and other climbers advocating for name changes point out that context doesn’t appear anywhere in the books.

“I don’t get the context so why are you defending the context of it, when for 20 years I wasn’t given the context? It’s only after I voice my opinion and my concerns about it that you tell me it’s not racist because it was done in such a way,” Grant said.

The first ascensionists NRAC has approached so far seem to agree with Grant. Each has agreed to change their route names. Even Williams said he’s trying to decide what he’ll rename “Aryan Race.”

For his part, Grant said he’s happy with the progress NRAC has made so far with getting the names changed. But the damage is done. Some routes are always going to bring up bad memories, even once they’re called something else.

Update 2/5/2021: The new guidebook, New River Rock Vol 2, is going to press now at Wolverine Publishing. NRAC changed 55 names that they identified as offensive in Volume 2 with the cooperation of the first ascensionists. There were a few routes where NRAC had to rename the route themselves, because the first ascensionists couldn’t be contacted, and in at least one case, because they were deceased.